Here it goes to:

Sometimes the compromise is not the bad solution. Eldorado combines the best what the F3F and F3B gliders can offer. It’s characteristic elliptic wing provides the best lift distribution on whole wing area making the roughest manoeuvres possible. Thanks to it’s speciallly designed airfoils and wing twist it negates the wrong characteristics of the elliptic wing such as instability at high angle of attack or low speed. Time has proven the Eldorado allows the fastest ridge manoeuvring. The great rigidity of it’s construction makes the most confident aerobatic manoeuvres possible, differing it from other F3F/F3B gliders. 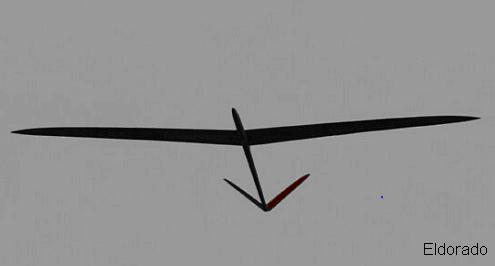 F3B models are widely regarded as the true all-rounders of purpose-built performance glider models.
This is already clear by name because of the different flying tasks of the F3B competition program.
Models of this competition class should master the cross-country flight and the speed flight without constructive changes (only a weight adaptation is permitted) and also a thermal flight of 10 minutes even in weak conditions from the achievable start altitude with 200 meters of effective rope length.
Over the years, it became clear that competitions in distance and speed flight were won.
As a result, the development of modern F3B models has also focused primarily on the criteria optimised for this purpose; so current F3B models are also gladly and successfully used in the F3F class.
With our Eldorado, we offer an F3B model that, in addition to the successful competition, also gives the everyday pilots with a penchant for “painless flying” in all weather and wind conditions many great flying hours.
A standard F3B competition version is available as well as a reinforced version for the special use in harsh flying areas or for those everyday pilots who have a tendency “to more than necessary”.
You really do not need more “model” …..
… not only we, but also many hundred enthusiastic customers thought so.

Until we realised on customer initiative another variant, the Eldorado light!
The Eldorado light is the new interpretation of the dynamic thermal all-round glider.
A model that achieves fantastic sink rates through its possible low wing loading, even in calm air, but can still be flown dynamically through the design design to outside the F3B competitive requirements
redefined the dynamics of a thermal glider.
And so impressive that different pilots have decided to use our Eldorado light in high-class F3J / F5K thermal flight competitions in stronger winds!
The Eldorado light is therefore the decision for all pilots who always define gliding as the longest possible thermal flight but do not want to miss out on the dynamics and fun factor of a real all-rounder!